We here at GG&S are pleased as punch to report that another longstanding want has found its way to us—this time, our buddy Ryan (of Strange Sisters fame) was lucky enough to find a spare copy of Corley Dale's Man in the Box while vacationing in San Francisco. We're grateful to the li'l king for hooking this one up ...and it was the right thing to do considering that he turned us on to this necrophilic milestone in the first place. Thanks again! 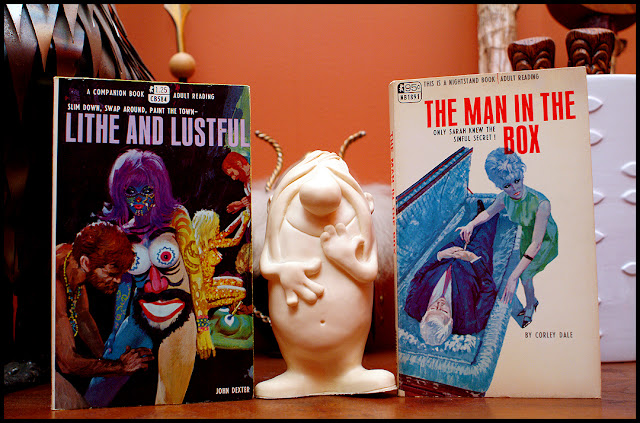 Coincidentally, we also picked up Lithe and Lustful, notable for its swinging love-in depiction, the same week and, again, per Ryan's recommendation. Both of these books were issued in 1968 and both feature cover art by Robert Bonfils.
at 6:55 PM 3 comments

Out Of The Can 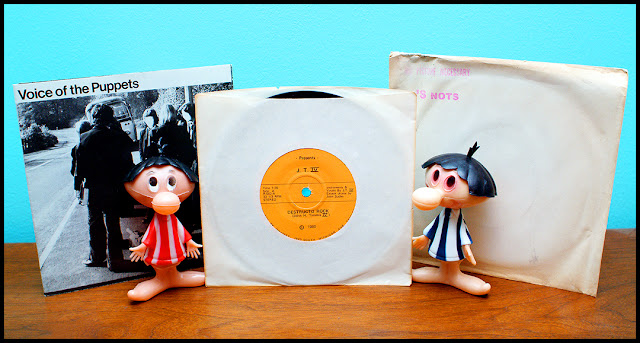 We've succeeded in painting ourselves into a corner when it comes to picking up punk 45s, so we're beside ourselves with excitement over the singles that've recently materialized at GG&S HQ.

One of the most recent records to ascend to wantlist status was Voice of the Puppets' sole vinyl outing from 1980. The sound of C-86 six years early? Many thanks to Jeremy and John for helping us to round up an original copy.

Similarly, scoring a copy of John Henry Timmis' anthem, Destructo Rock, seemed like an impossibility until we received a minty copy as a belated wedding gift from the mysterious Mr. X. Our benefactor must've had a premonition—if only we'd had this record in time, it would've made an excellent soundtrack for our wedding night! Many thanks again, Roger!

Sadly, no YouTube video exists for the Snots' exercise in compression, So Long to the Sixties, so we'll leave y'all with J.T. IV's haunting Out of the Can. Also, anyone with a copy of his Waiting for the CTA single is most definitely invited to write us!

Home Is Where The Floor Is 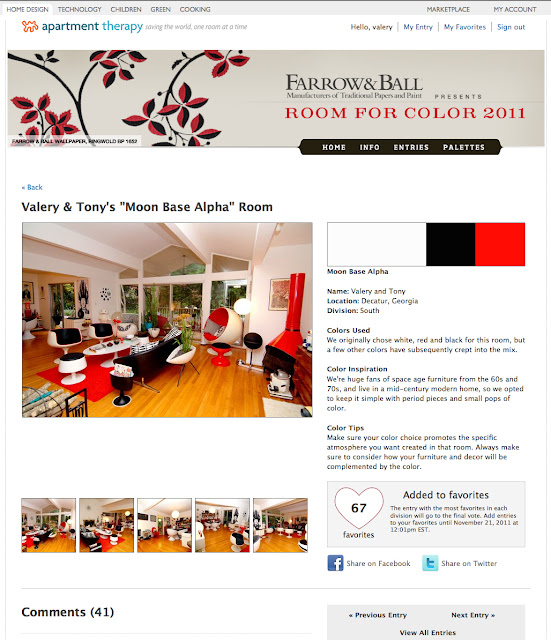 Yep, we've done it again—we up and entered our humble abode into yet another contest with the fine folks over at Apartment Therapy. It seems as though we've succeeded in eliciting a polarized reaction among the site's readership this time 'round, so we're hoping y'all will weigh in with glowing character assessments, vociferous rebuttals and, most importantly, votes! Cast 'em early, often and thanks again for your help!
You can access our slot by clicking here.
at 7:46 PM 6 comments

Blame it on a whirlwind trip to Pittsburgh this past weekend, the resulting jet lag or maybe even a private midnight screening of The Car, but we completely spaced on two other presents that made their way pre- and post-wedding. Our sincerest apologies, friends! 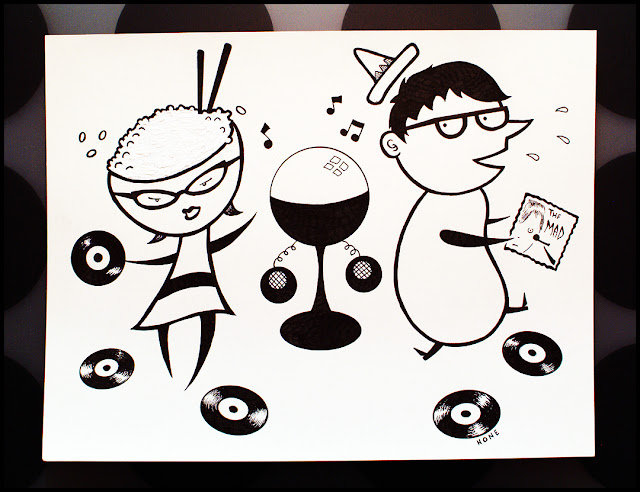 Our pals Hone and Carmela kindly forked over the original art Hone whipped up for our wedding invitation's record label. I think Hone really captured my inner-legume (!) and the steaming grains teeming between Valery's ears. Expect this illustration to adorn a full merchandise line in the near future! Also, a special thanks to Carmela for encouraging Hone to sign this one for us! 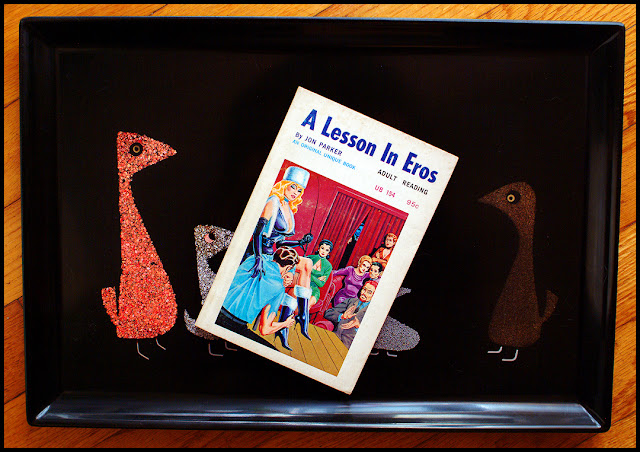 Many thanks to Tim, our Facebook friendster and spiritual advisor, for acknowledging my defeated, feeble whimpering when he unveiled his sizable duplicate stash. This'un features one of Eric Stanton's best covers and seemed especially apropos considering the circumstances.
at 6:01 AM 0 comments

Despite the fact that most of our wedding presents came in the form of much appreciated cash-money, a few of our friends elected to make some wholly appropriate donations to the GG&S archives. 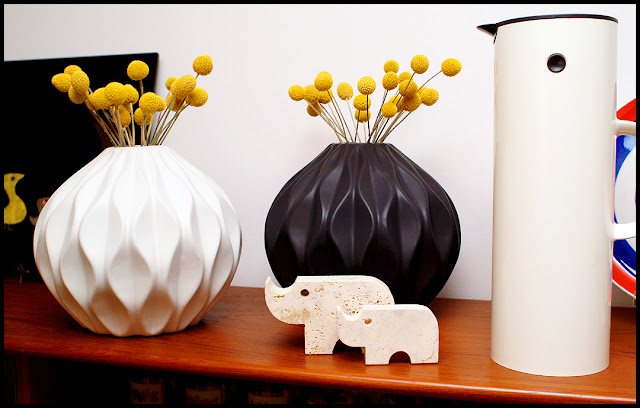 Our friends Ryan and Gianna were kind enough to give us this rhino pair, adding to our ever-increasing herd of Travertine limestone animals. Ryan claimed that he and Gianna had no idea that we already had a few of these Mannelli creations around, and picked 'em up completely on a hunch. Nice! 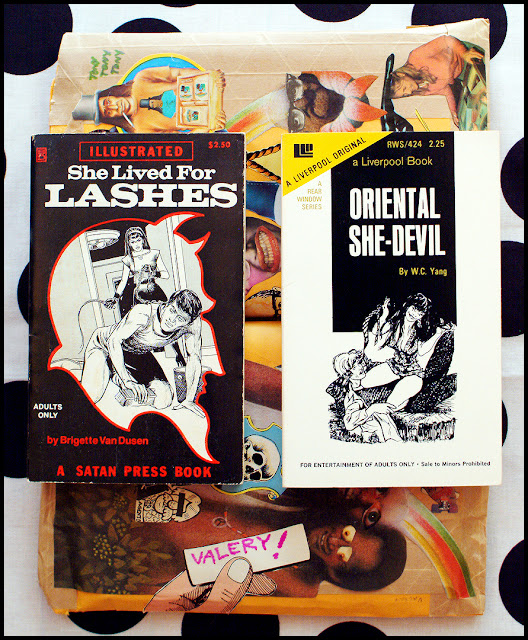 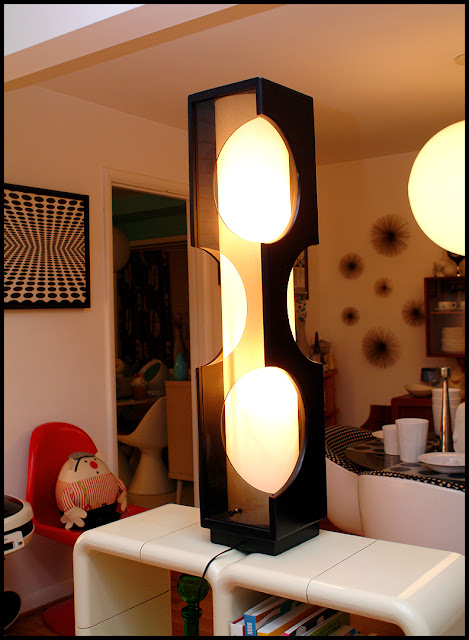 Our pal Mike really outdid himself, presenting us with this 3' smoked acrylic/wood floor lamp. This'un is slated for a spot in the home office, so we apologize for our impromptu placed atop shelving staging. We promise we'll find a more ideal setting for it in the coming months. 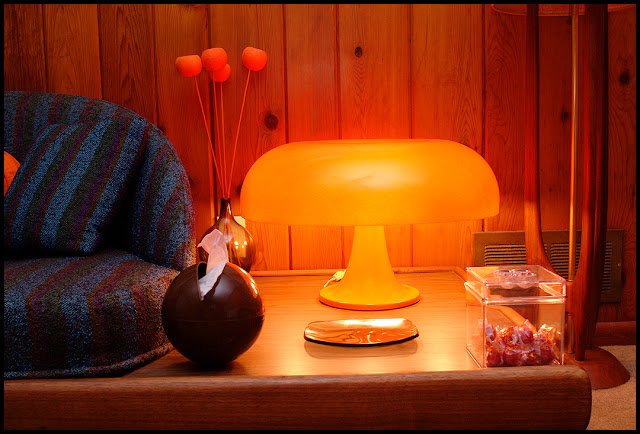 Last but certainly not least, Mike must've been implying that we needed better lighting, because he also gave us an orange Nesso by Artemide. A classic designed by Giancarlo Mattioli in 1964, we'd always wanted one of these lamps, and were especially pleased that Mike delivered it in its first edition which, unlike subsequent examples, is fashioned entirely from fiberglass.

Again, thanks to you three, and thanks again to everyone else—we're really excited about starting in on our home renovations, and we're exceedingly grateful for the funds that are making it possible. Expect plenty of pics in the near future!

Alright folks, we're back to updating this blog on a semi-regular basis, so here's our first official post as man and wife. Thank you to everyone, again, for their kind comments re: our wedding photos. 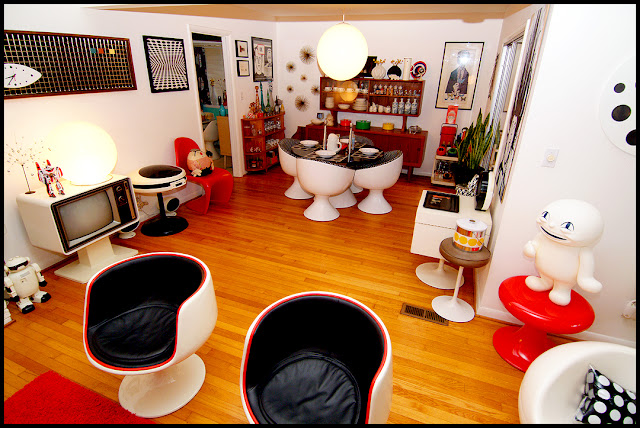 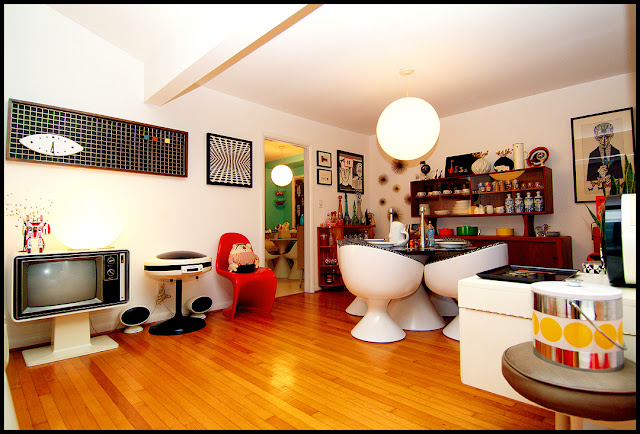 About a month prior to our wedding, Valery and I walked into one of our favorite antique haunts and bumped into the teak behemoth that's now looming center-stage in our great room. We'd seen a similar Danish hutch in Phoenix shortly before I moved here and we really debated picking it up; however, timing and circumstances didn't permit it ...a situation we'd regretted ever since. Fortunately, getting this one home wasn't much of a hassle: all it took was a rental van and an extra set of hands—thanks, Lewis! Also, a big thank you to Mary for all of her help! 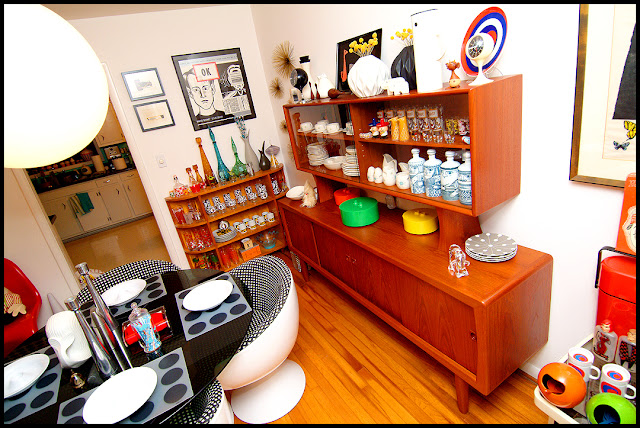 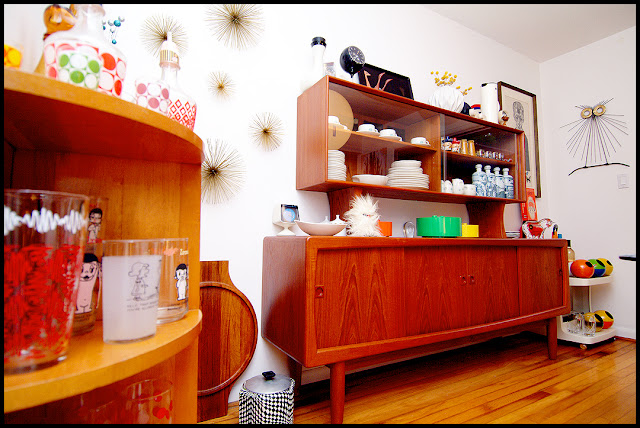 A more significant obstacle was figuring out how to get this room back together—of course, right after we thought we'd finally finished it off! We had to rearrange some of our artwork and assorted pieces of glassware, but we're pretty happy with how it all ended up. 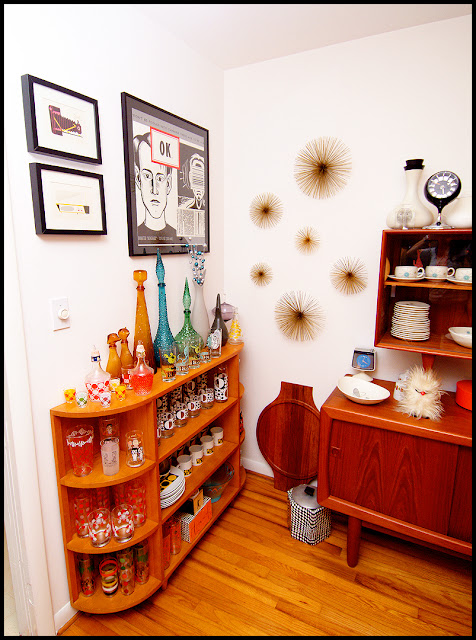 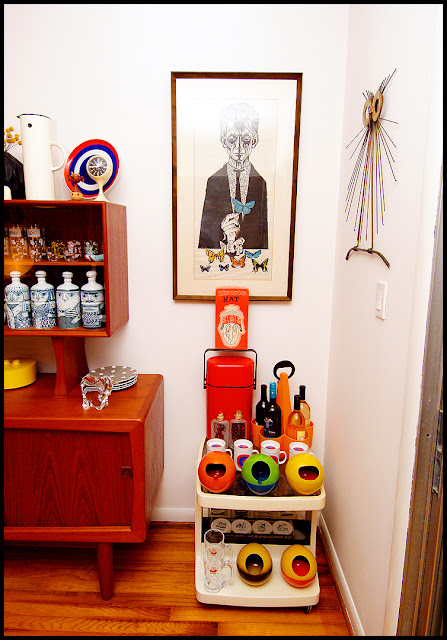 Another consequence of the new set up was a blank spot that popped up unexpectedly. Fortunately, our friend Justin helped us fill it out with this large woodblock print by Frederic Marvin. This creepy lepidopterist comes housed in his original, heavy wooden frame, and he's from the same estate sale that delivered the large metallic Dodo stationed in our foyer. That must've been some spread!