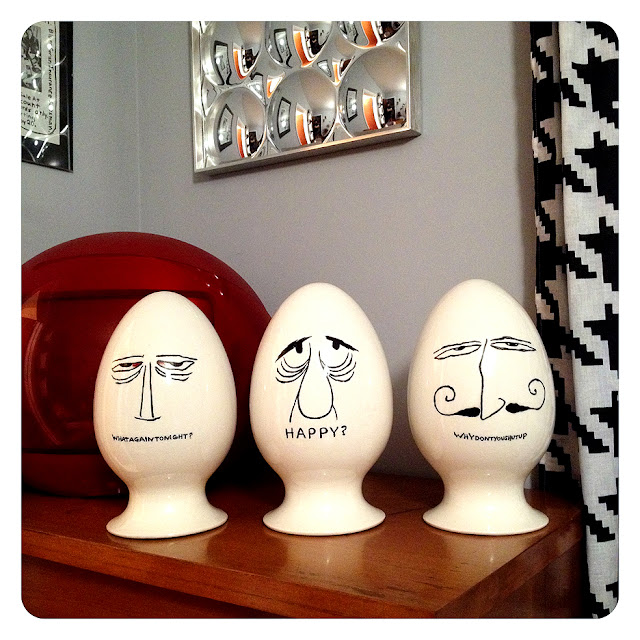 Here's a quickie to let y'all know that—while we were unable to maintain our annual procurement cycle—we finally managed to scoop up our third (and final) most-wanted egghead. Designed by Mr. LaGardo Tackett and released in '58/'59, these ovular rascals have become increasingly sought after and hard to find—especially the larger 11" versions. While we wouldn't say no to getting a few more, I think we're plenty satisfied with this quarter-dozen. A big thank you to Debi and John for cutting this one loose!
at 5:22 PM 3 comments

Unbeknownst to most everyone, we just got back from a weekend in Pittsburgh. And, as much as we both love the steel city, we're saddened to report that it'll be our last pass through for at least the next year. We'd certainly grown accustomed to visiting often due to my enrollment in grad school at the University of Pittsburgh, but—barring any unforeseen circumstances—I should be receiving my MLIS in less than a month. Woo!
Outside of my extended education and (subsequent) gainful employment, the best part of the entire experience was becoming better friends with our buds Hone, Carmela, Steve, Siena, Suz and Pogo. Thank you guys again for always being so welcoming—and a special thank you to Hone and Carmela for never griping about our habitually late flights and, especially, for their unparalleled hospitality. We hope that we can repay the favor sometime soon ...and many times over!
Now that all that sentimental crap is outta the way, here are some pics we snapped while we were outta town: 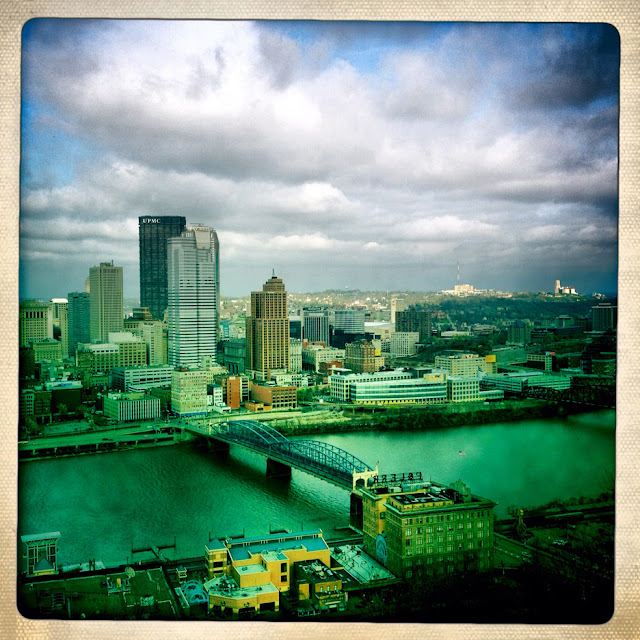 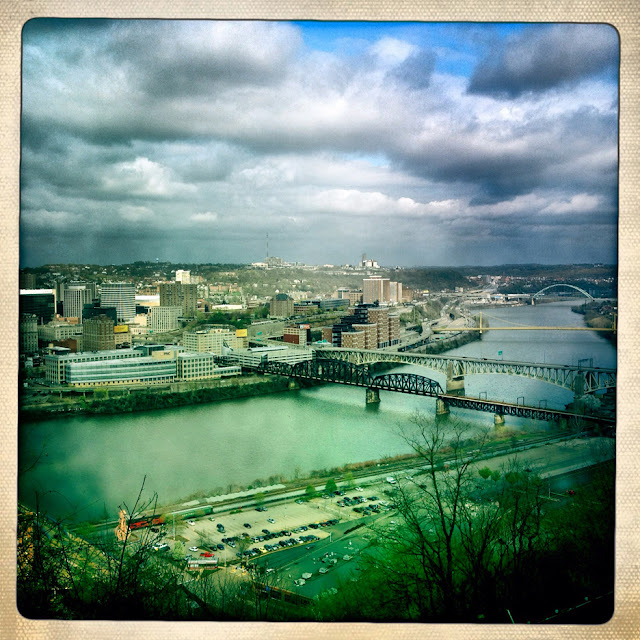 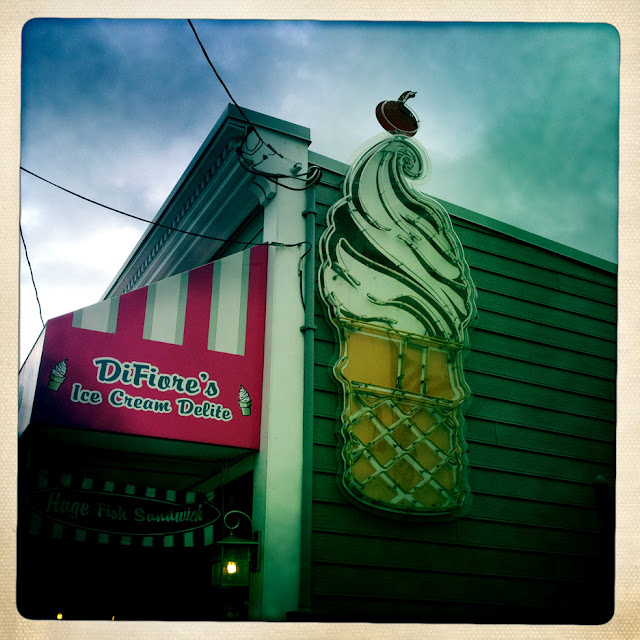 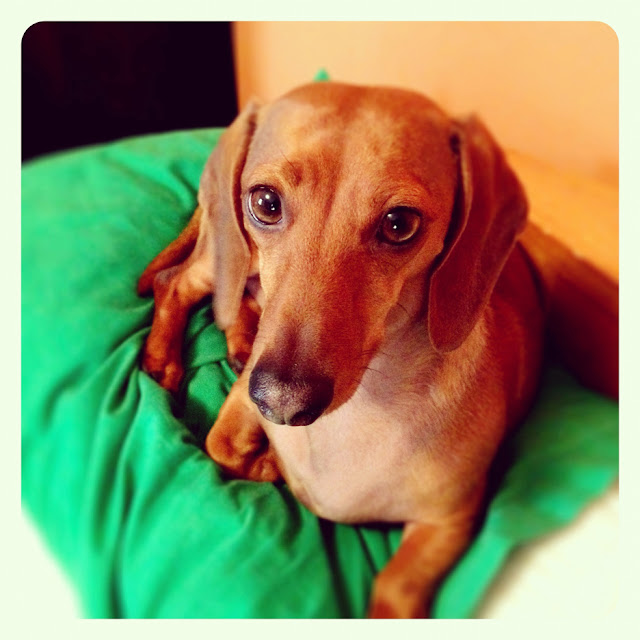 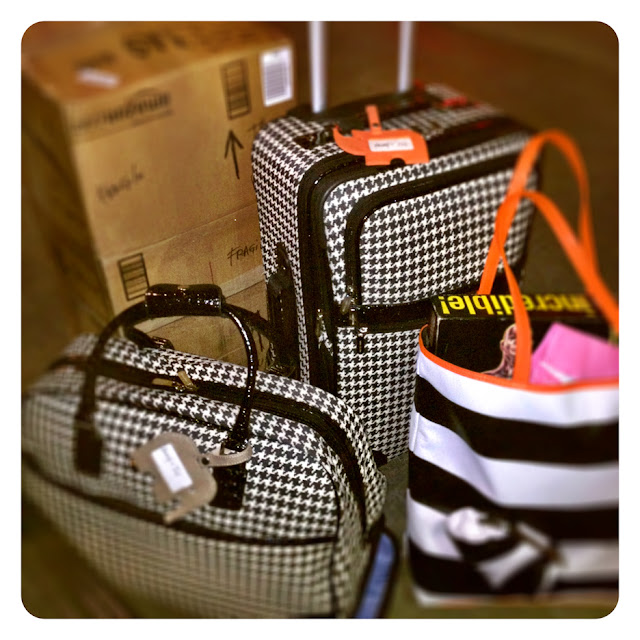 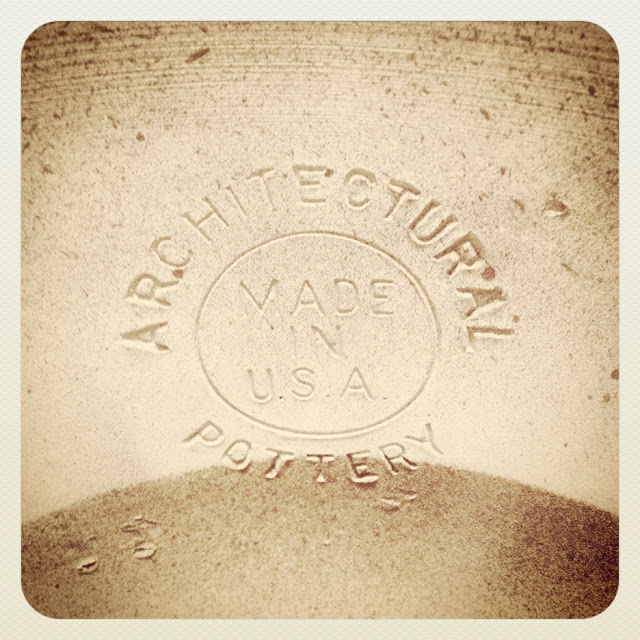 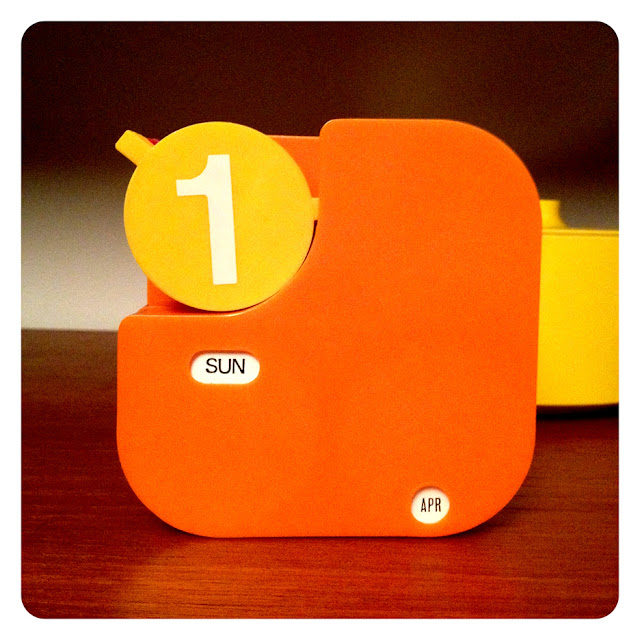 Now, I'm sure everyone is wondering what we scored on our jaunt, so here 'tis: 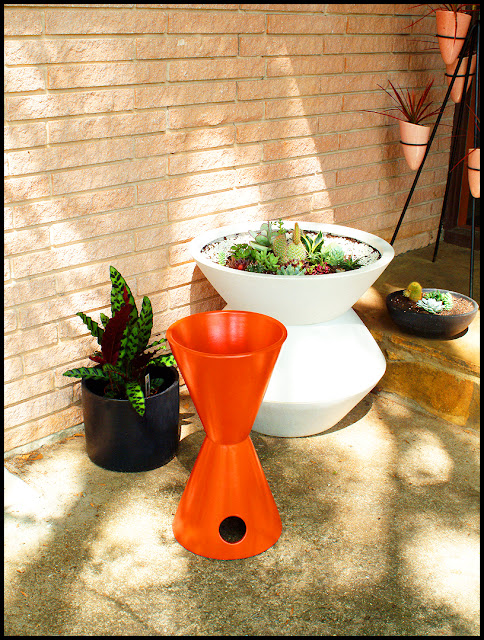 Valery spied this vintage Lagardo Tackett planter the first time we visited Pittsburgh in 2010, but we were reluctant to pick it up due to its size and the fact that someone had painted it a delightful shade of orange. Fortunately, we both liked the new color and the planter's previous owner quoted us a clearance price far below what an (unpainted) original Architectural Pottery example typically sells for. 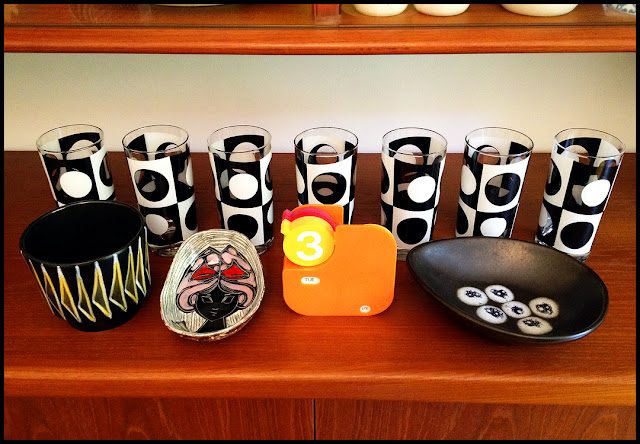 I'd purchased these Georges Briard glasses for Valery a few months ago while I was visiting solo, but I left them behind because I didn't want to deal with packing them up. Fortunately, Valery found a few more fragile ceramic items to bundle them with. We also found this fantastic perpetual calendar at an antique store we stumbled into. We've only ever seen one other example and it was ridiculously overpriced—way more than the $6 we paid for it! 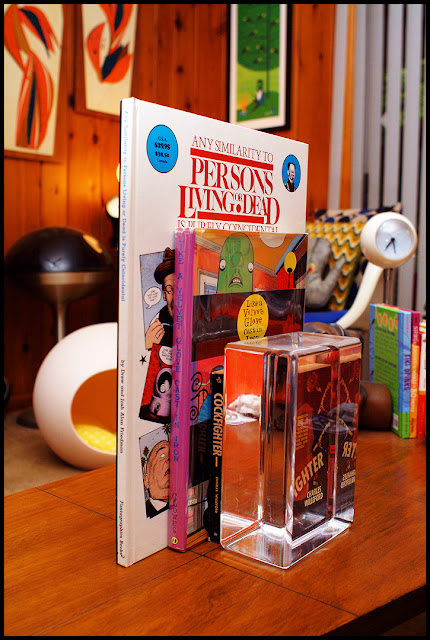 I'd been looking for some new bookends for a while and nothing beats two solid lucite bricks! I was convinced that stuffing these in our carry-on luggage would guarantee a full cavity search, but we only had to deal with some slight harassment and a few puzzled looks. 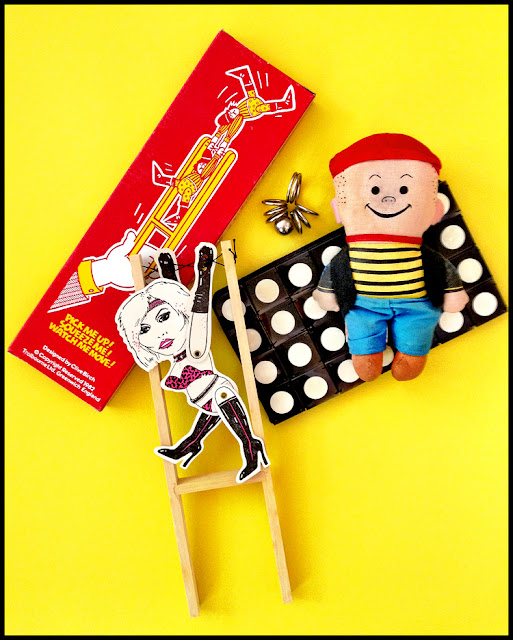 Valery continued to score with a mod polka dot purse, a vintage modernist ring, a stuffed Sluggo and a bizarre Blondie acrobat squeeze toy from '82! 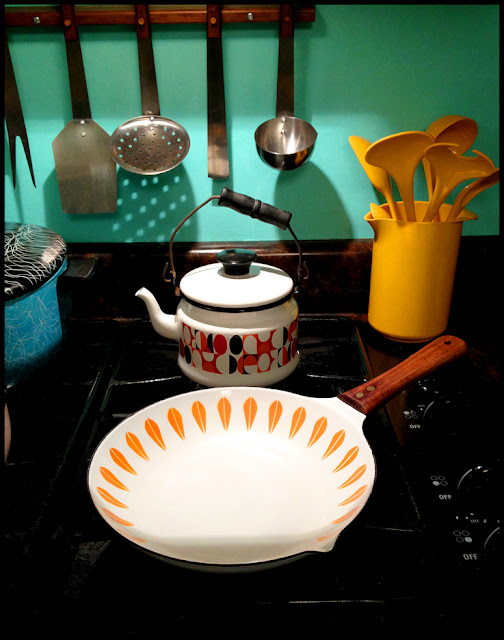 Valery also found this vintage Norwegian Cathrineholm pan for $20. This is the only time we've found an affordable example in the wild. 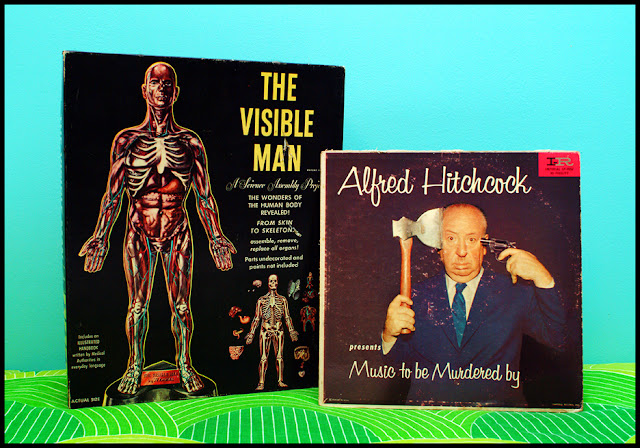 We even managed to hit a record swap while we were in town! Gotta say, I was pretty stoked when I flipped to the Alfred Hitchcock LP I've been searching everywhere for; unfortunately, the record's condition still has me hunting for a decent copy. Oh, well! At least we found a complete Visible Man for a flat tenner.
at 7:34 PM 1 comments

We'd been kicking around the idea of starting up a booth for a while now, so we were pretty pleased when we caught wind that there might be a little retail plot out there for us to call our own. It should go without saying that we're really excited to start this project, and we promise we'll be good about scrounging for new items regularly. Many thanks again to Angela and the crew at Highland Row Antiques for letting us share in the fun! 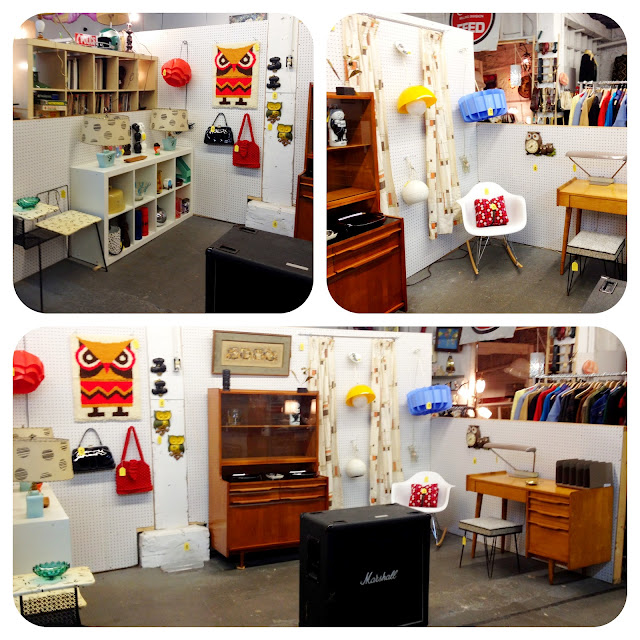 The above photo was snapped at the last minute, but it should give you an idea of what to expect—unfortunately, it's already outdated, as we brought in even more stuff the following day. We've already got additional items ready for delivery as soon as time and space permit. Please remember to stop by when you're in Atlanta and make sure to check back often!
at 5:45 PM 1 comments
Newer Posts Older Posts Home
Subscribe to: Posts (Atom)