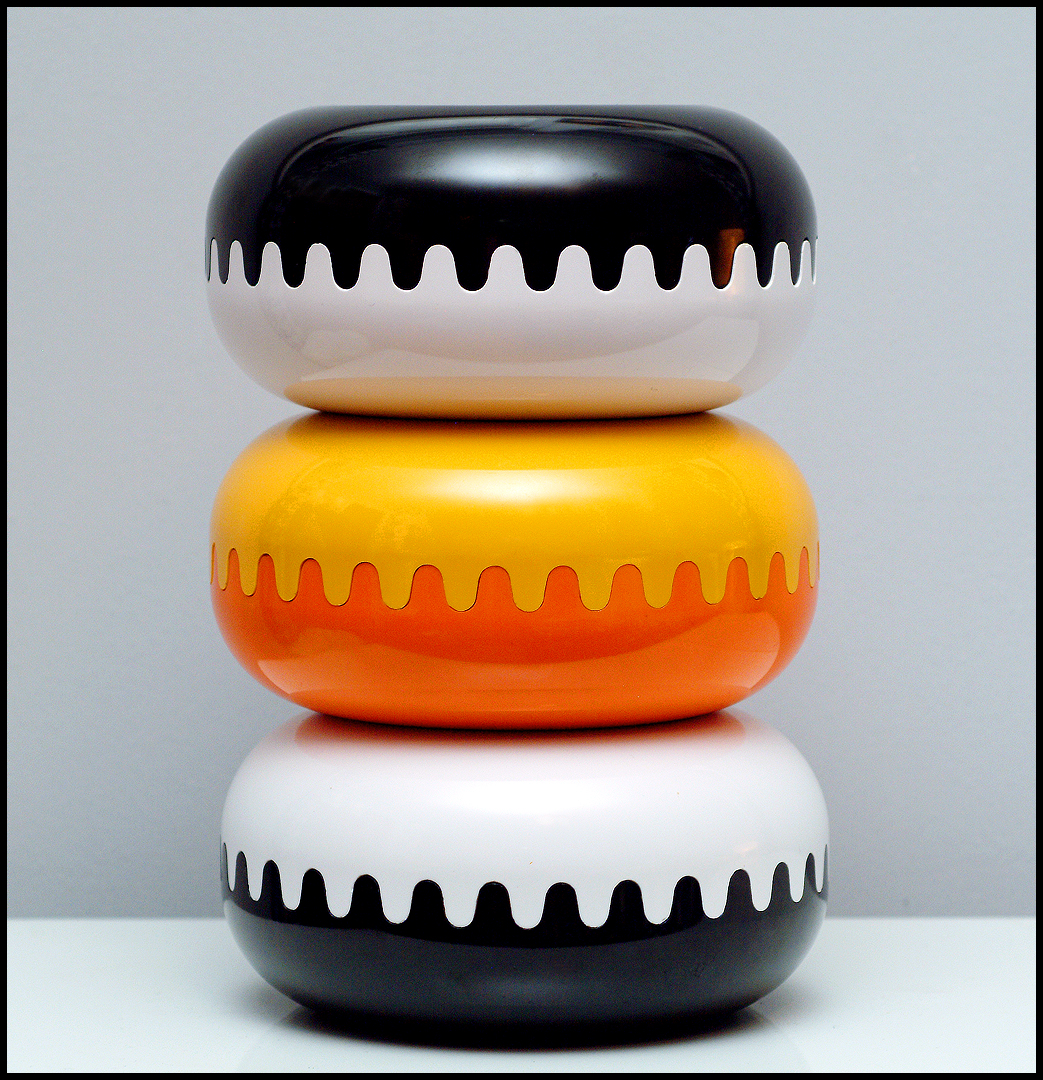 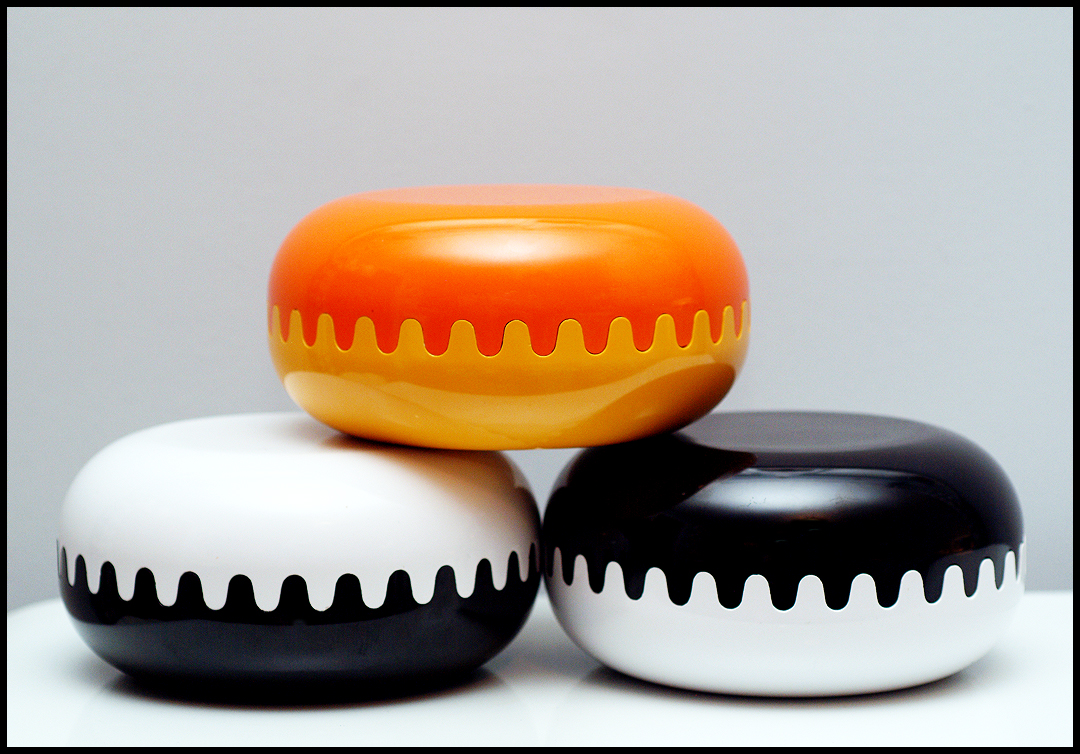 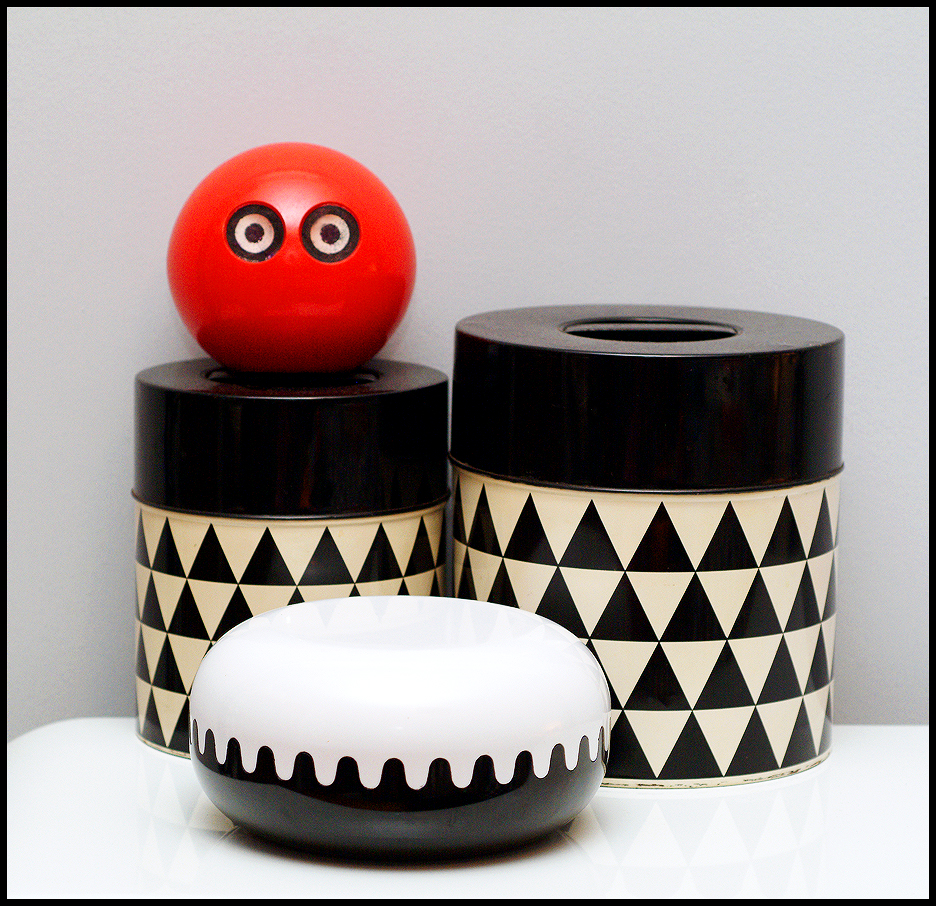 We're quite smitten with 'em. Alan Fletcher's iconic receptacle designed in 1968, fashioned from melamine and produced by Pentagram. These were later redone in plastic by Mebel. Finding the reissues isn't easy, but turning up an original set is next to impossible ...at least for those of us in the states. Unsurprisingly, we're pretty stoked to now have three Pentagram editions to call our own.

Many thanks go out to our pal Jay for recently furnishing us with two of these elusive design objects. Also, thanks to Jessyca who sold us our white specimen many months ago!

Does anyone have an orange/yellow or blue/green Pentagram set for sale? Please get in touch, if so!
at 4:10 PM 2 comments

We've spent the past few weeks clearing out our office for its upcoming renovation, and we quickly realized that we'd accumulated a lot of vintage space-age plastic items since the last related update. We figured we may as well photograph these now, as they're likely to be in storage (elsewhere in our home) for the foreseeable future. Not even sure how long some of these have been kickin' 'round the house but, without further ado, fix yer spinning orbitals on the following! 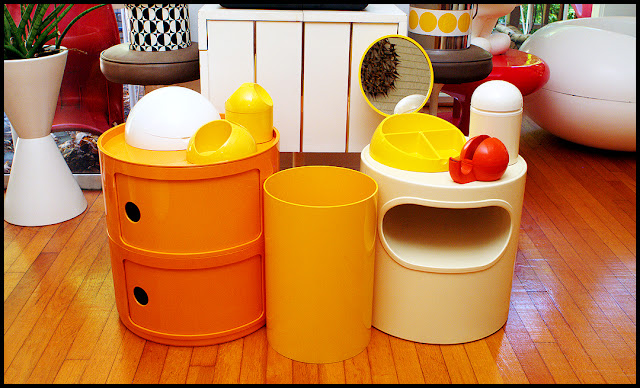 A white Artemide Giano Giano Vano side table designed by Emma Gismondi Schweinberger in 1966 is a semi-recent arrival, as are the large, vintage orange Componibili storage units designed by Anna Castelli Ferrieri for Kartell (thanks again, Marc!). Ferrieri was also responsible for the tall white domed container (also for Kartell) we discovered for $2 at a thrift store in a remote part of Georgia. Another Kartell product is the yellow Gino Colombini designed wastebasket Valery turned up at a local flea market. Japanese designer Makio Hasuike created the miscellaneous bathroom containers for Italian company, Gedy, in the 70s. Lastly, we're not sure who designed the space age tape dispenser pictured above, but a sticker indicates that it's from Italy as well. 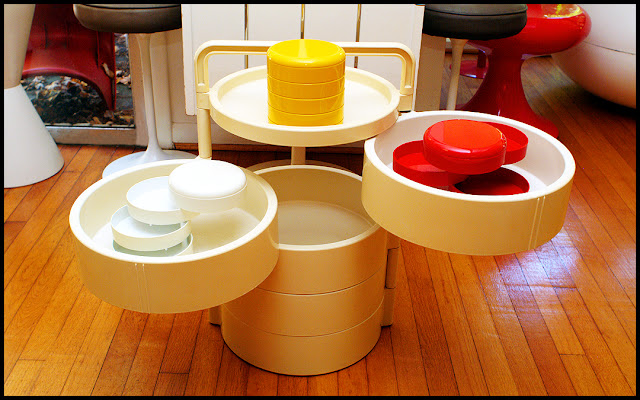 It seems as though we really can't get enough Kartell products. Here's a round trolley cart designed by Franco Anonni that we purchased from our Instagram buddy Melissa. Thanks again! We've also had great luck turning up these Italian desk caddies designed by Rino Pirovano for Rexite in 1970. Thanks again to Danny for the white one! 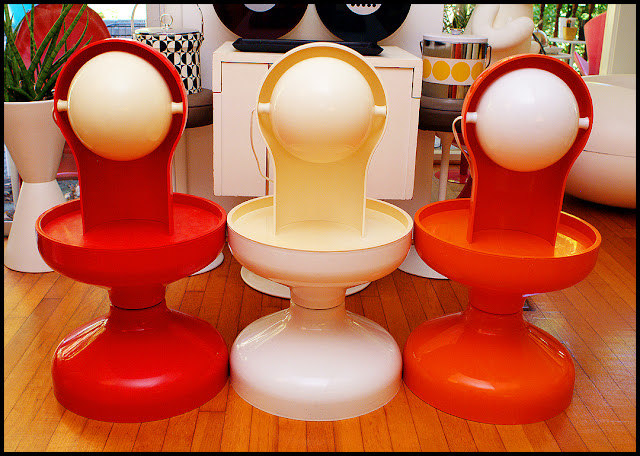 Danny was also kind enough to hook us up with a white Telegono lamp designed by Vico Magistretti and produced by Artemide in 1967. We lucked out and found an orange example buried in the internet's depths a few weeks later. Lastly, our buddy Amy sold us her red version, successfully rounding out the trio! 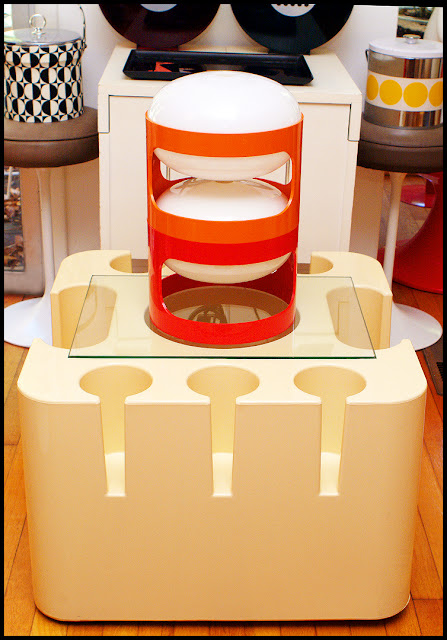 Amy also kicked down her old Bacco bar, designed by Sergio Mazza and, again, produced by Artemide in 1967! Thank you so much, Amy, we love it! Our buddy Marc also came to our aid (again) by purchasing an orange Kartell KD27 lamp (designed by Joe Colombo) from a dealer in Germany and shipping it to us. Coincidentally, a week later, we discovered a red KD27 on Atlanta's Craigslist and purchased it in person! Now, if someone could just help us locate a yellow one, we'll be all set! 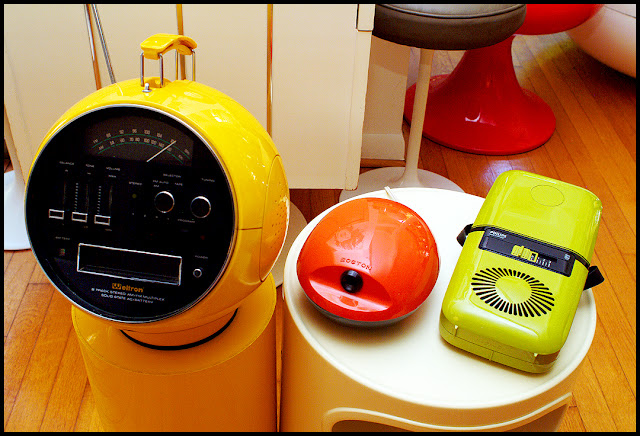 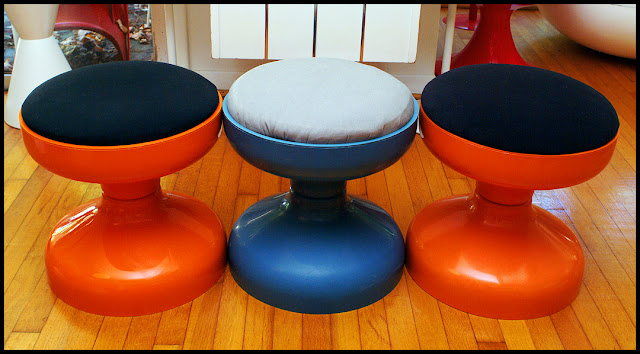 Astute GG&S readers will have no doubt noticed that we had an orange Kartell Rocchetto stool (designed by brothers Pier Giacomo and Achille Castiglioni) featured above. Many thanks are due to Trish, Martin, Damian, Maddie and Lady Frito Lay for their help in getting this pair from Melbourne to Atlanta (by way of Chicago). It may have taken over a year to accomplish, but it was well worth it! We're also grateful to our buddy Zack who stumbled across the blue specimen featured above! These three will all end up in the office once it's done. 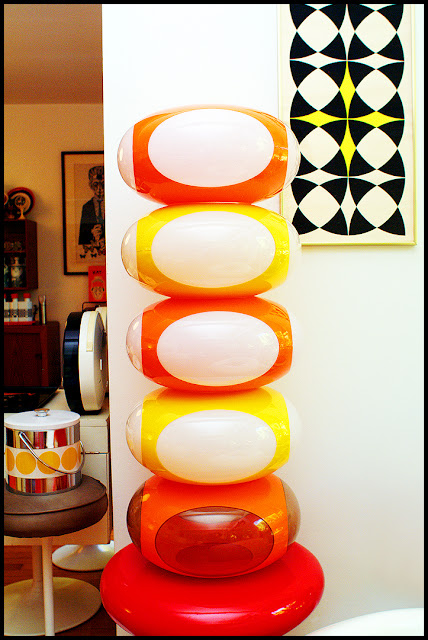 At least four of these vintage space-age light fixtures will also end up providing some much-needed illumination in our upcoming project. Despite the fact that these are regularly attributed to Luigi Colani, we're skeptical about the connection. Still, we love 'em and we were overjoyed when we bought four mint ones from a dealer right here in the states ...and for cheap! The fixture with clear panels came from our buddy Darrell and will end up in our master bathroom. 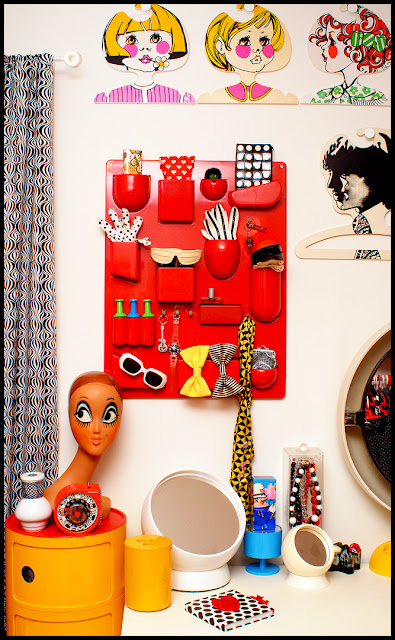 Well, we thought this update was over, until we remembered that we had actually picked up a vintage, red example of Dorothee Becker's Utensilo (that replaced the white one in Valery's dressing room). Our office will feature joint work stations, so it's likely that the previous one will end up in Valery's area. OK, that's really it for now! Whew!! 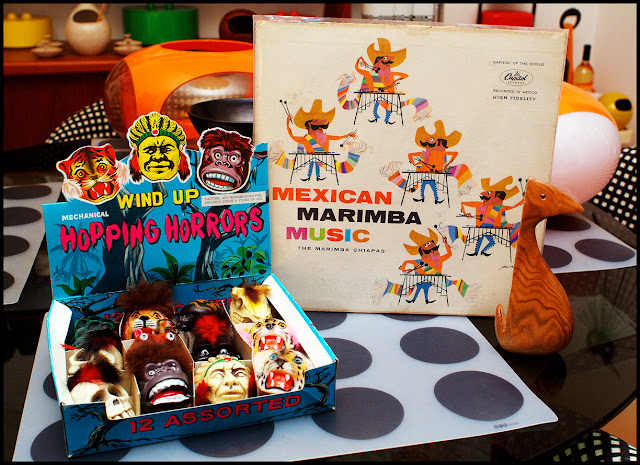 Being surrounded by friends and family was the salve that dulled the pain of turning 37 last month ...or something. Or maybe it was the awesome gifts Valery showered upon my undeserving self, like an assortment of vintage wind-up Hopping Horrors (complete with box), a marimba record featuring an overly festive (fellow) Mexican and a carved bird reminiscent of those feathered fellows fashioned by Couroc? 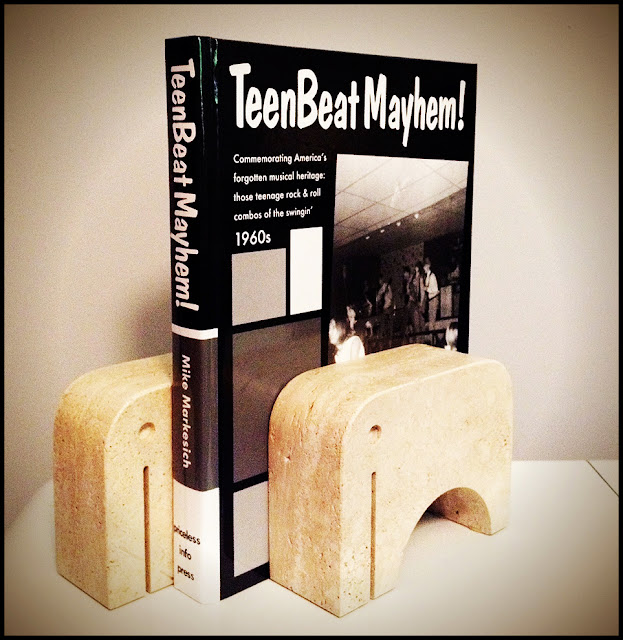 As if my senses weren't overloaded enough, Valery also delivered Mike Markesich's exhaustive TeenBeat Mayhem!, a rumored tome many years in the making, and a release highly anticipated by fans of raw n' primitive 60s recordings. Make sure to secure yourself a copy today!

Last but not least, my pals Mike and Damian were swell enough to hook me up with a triply stamped copy of the first Victims single and a clean copy of the third Eyes 45, respectively. Seeing as how I already owned the Victims, I sold my previous copy to a buddy (thanks again, Trey!) and directed the funds toward a tasty example of Jerry Lott's epic, Love Me, on Dot. A Happy Birthday to me, indeed!

And before I forget, many thanks to Tim, Cristina, Kevin, Amye, Susan and Corey for making it out for an impromptu birthday dinner (and thanks again for the LP, too, Tim—I suck!). 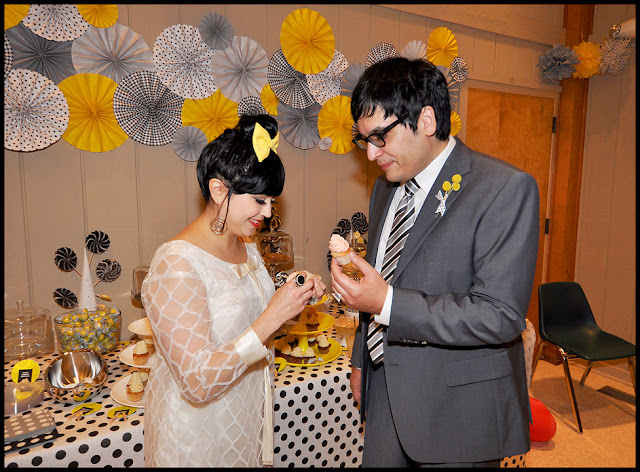 One year ago today, I married my best friend.
at 9:35 AM 3 comments 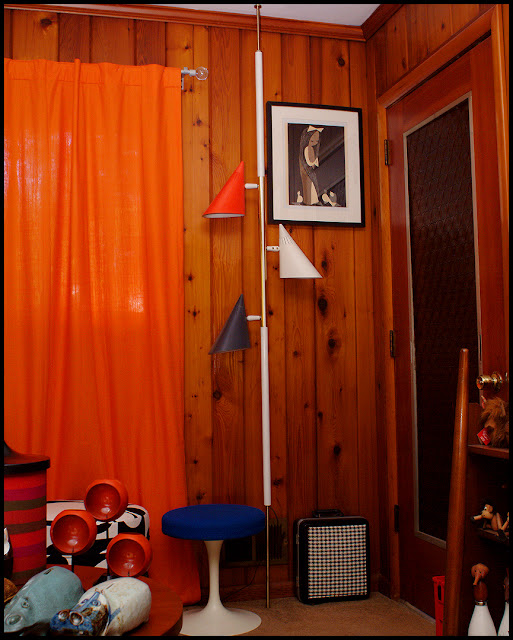 It finally happened yesterday: all ten feet of the Lightolier lamp we turned up via Los Angeles' Craigslist appeared on our front doorstep! While it's certainly true that pole lamps aren't especially rare, finding this 1959 example (designed by either Gino Sarfatti or Gerald Thurston), with its signature triangular shades, proved itself a daunting prospect indeed.

Here it is at home in our den. Now we just need to pull up and replace the hideous carpet, paint the ceiling, and we should be about done with this room. 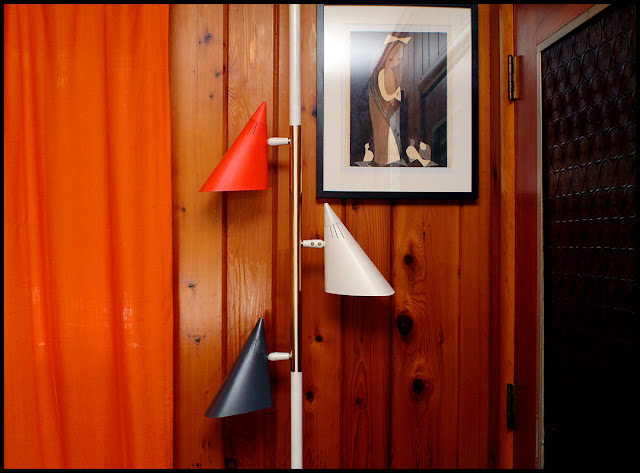 We'd really like to extend our deepest thanks to our buddy, Lewis, for picking this up for us (and negotiating a much nicer price) and my brother, Enrique, for storing this in his Los Feliz garage for the past six months and shipping it to us! Well worth the wait, we say!