The Other Newest One

Summer's coming to a close, folks, and we're headed into a hectic schedule that'll undoubtedly result in another fallow period for GG&S. As (a meager) consolation, we've decided to unveil some of the items we've picked up recently. 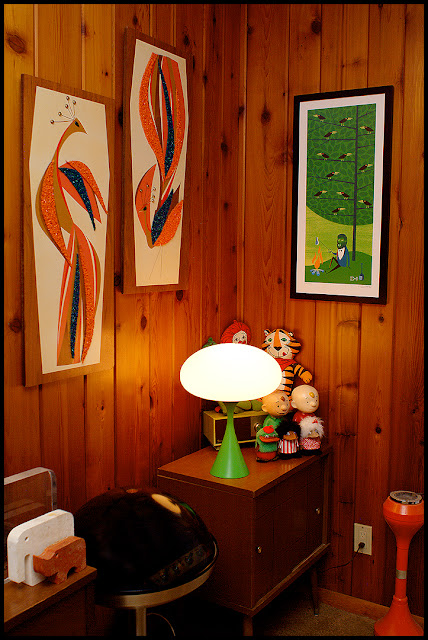 Here's a Laurel lamp we nabbed earlier this month. As some of you may remember, we picked up a brushed steel example a year or so ago; however, we remained on the lookout for a more colorful specimen, and we were pleased to turn up this green beauty, as it fits our den so perfectly! 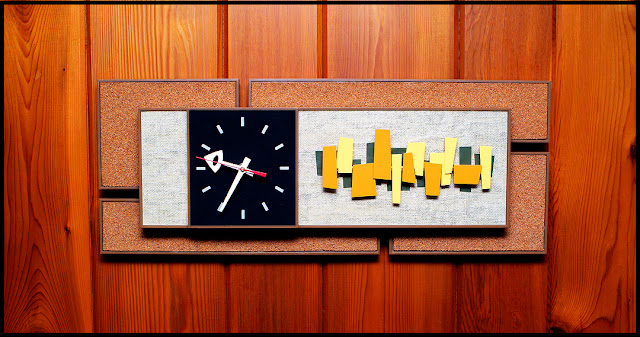 Here's another recent addition to our den. Valery loves the Mondrian-inspired wall clock Sunbeam produced in the 60s, but I've always been partial to this'un—which is way more indebted to an Eames or Nelson approach toward modernism. We'd also appreciate any leads on a reasonably priced Mondrian-esque Sunbeam, if anyone knows of any! 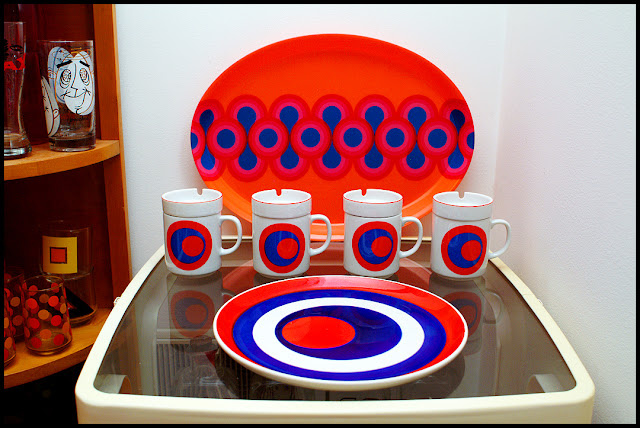 Our buddy Darrell sold us this handsome Guzzini tray designed by Ornella Noorda a few months ago. Coincidentally enough, we also found a complementary coffee cup and (matching) ashtray set while we were visiting Pittsburgh ...and later on we also discovered a similar plate produced by Mancioli. Thanks again, Darrell! 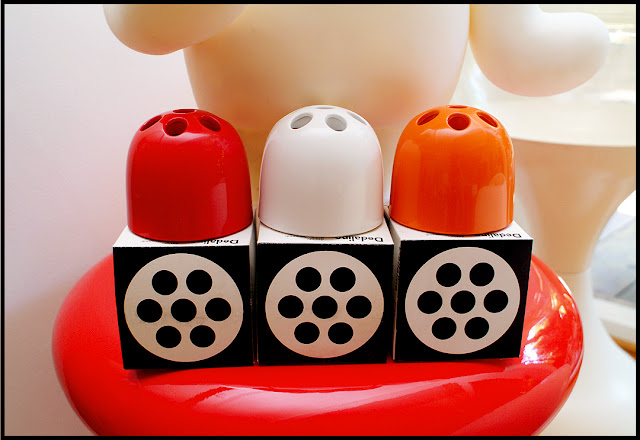 Our pal Maxime felt sorry for us and put us on the trail of some NOS Dedalino desk organizers, produced by Idarco and designed by Emma Gismondi Schweinberger. Now we just need to figure out where to put 'em! Thanks, Maxime! 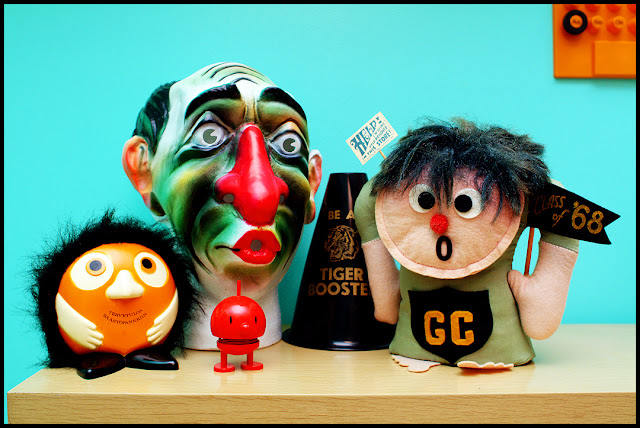 On a final note, we've continued to keep our shelves stocked by picking up another Gonk mascot, a springy red weirdo from Denmark, a ruby-schnozzed drunkard mask from the 60s and a Finnish Fauni bank from the 70s. Lastly, a big thank you to Hannele for the bank—your package ships this week. So sorry for the delay!
at 6:15 PM 10 comments

Darling, Let's Have Another Baby 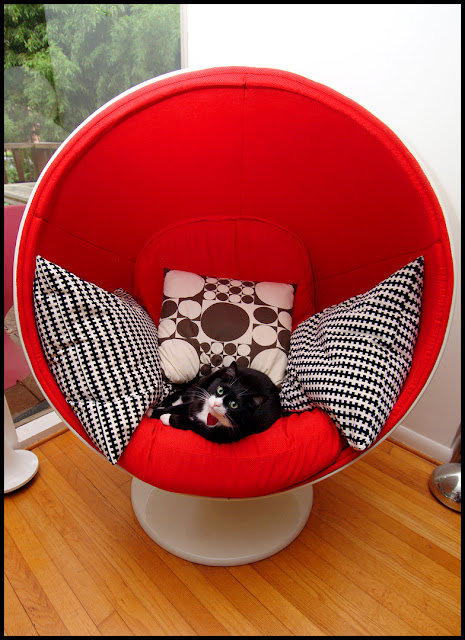 In honor of Otis' sixth birthday, we've decided to devote this entry to our favorite feline. I can't believe how quickly time has flown by! It seems like only yesterday that I helped rescue Otis from the mean streets of Cabbagetown. He was so tiny, he could fit in one hand! Happy birthday, li'l buddy! Hope you enjoyed your tuna cake! 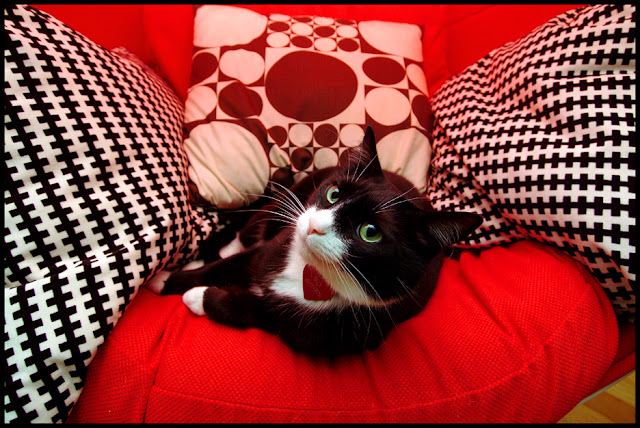 Here we find the li'l furball lazing about, engaged in his daily routine. He's truly one dapper fella! 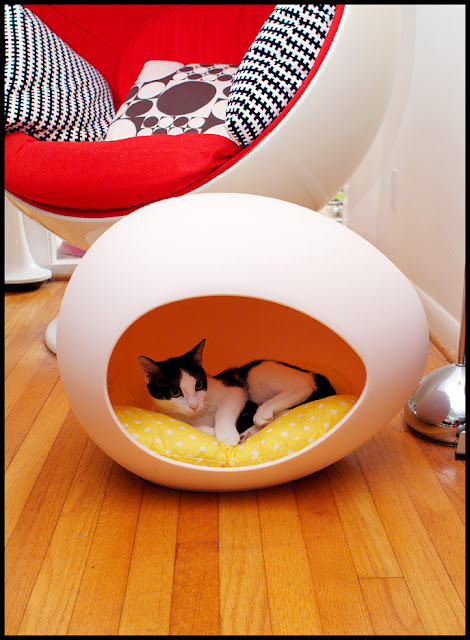 We're also happy to announce the latest addition to our family: Pepito!  We fell instantly in love with this li'l bugger when we were introduced last month. We met when Snap-2 It, an animal rescue organization, sponsored an outreach program at our favorite antique sale at Highland Row. We had been talking about getting another kitten to keep Otis company and thought Pepito was the perfect match! 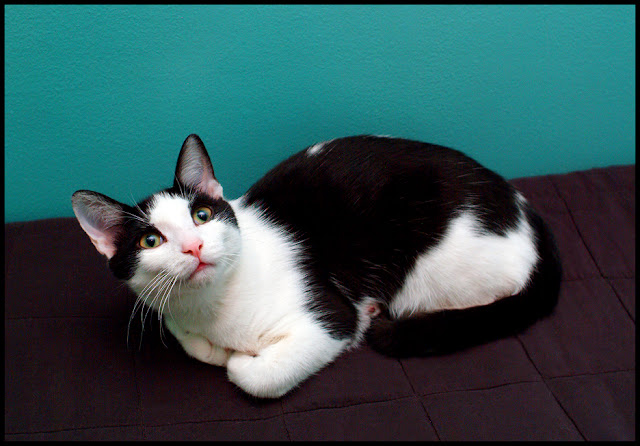 We've had Pepito for about three weeks now and he's a great playmate for Otis—in spite of the fact that he's only a kitten, Pepito has proven himself a fearless sparring partner!  We couldn't be happier with how these two have become fast friends.

We'd also like to thank Holly from Highland Row for being an amazing foster mom after she rescued Pepito.
at 6:00 PM 6 comments

Summer's a great time to catch up on reading, and we figured we'd fill y'all in on the page-turners that're currently absorbing our free moments ...OK, we're obviously lying about leafing through these tomes, but tracking them down certainly boiled down to a lot of hours spent. 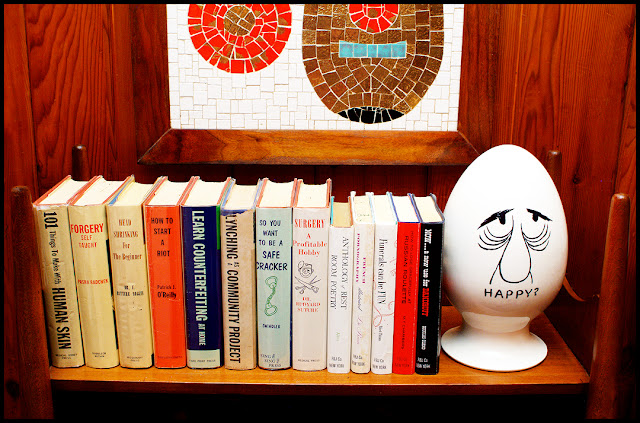 I was introduced to these publications when I visited Charles Schneider at his Los Angeles apartment a few years ago. Charles caught me ogling his copy of 101 Things to Make With Human Skin and was more than happy to fill me in on the details. It seemed that the book—actually, just the jacket—was part of a larger series of gag covers manufactured in the 1950s. I couldn't believe that something this patently offensive could've been produced fifty years previous. More importantly, where the hell was I going to find a copy in 2007? 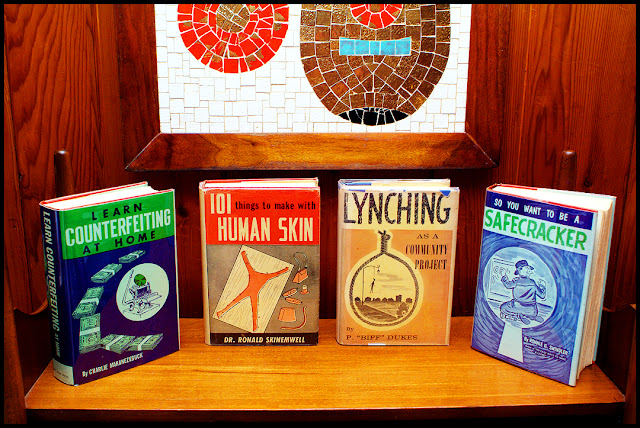 I soon discovered that these jackets were not exactly unknown entities among collectors, and book dealers often assigned them high—and rather unrealistic—price tags. As usual, I was determined to score these on the veritable cheap, so I contacted the company responsible for creating them in 1959! Amazingly, the culprits had managed to stay in business for the past fifty years ...not so surprisingly, they quickly dismissed my inquiries about any unsold stock! 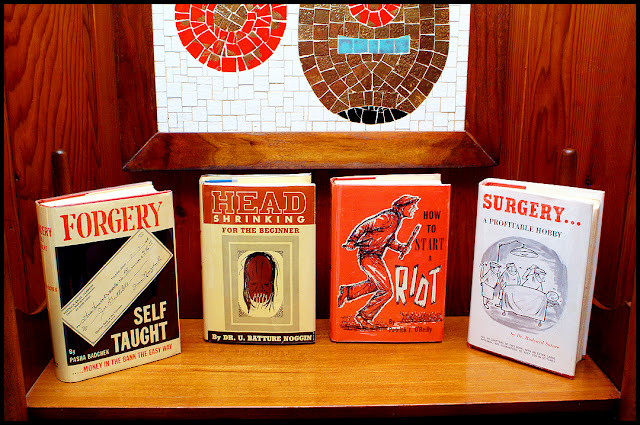 As luck would have it, our buddy Marc found a book dealer who was selling pristine examples at a very reasonable rate. The two tatty jackets I already had, 101 Things and Lynching, were sold before I contacted the seller, but I managed to snag the rest for far less than I'd ever seen listed anywhere else. Thanks again for the tip, Marc! Anyone with upgrade copies of the two aforementioned titles, please get in touch! 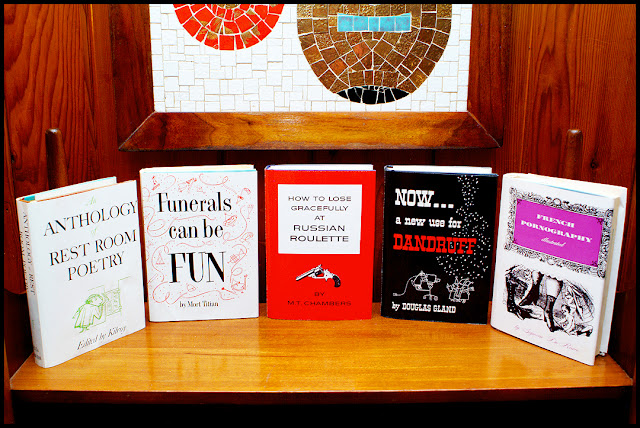 These smaller guys were produced by a different company (albeit also in 1959), and aren't nearly as inspired as the top eight. The cover art, subject matter and production values are decidedly inferior, though the Dandruff and Russian Roulette titles remain favorites. I believe there are at least another 5-6 jackets in this series, so if you've got 'em, please let us know!
at 8:00 PM 2 comments 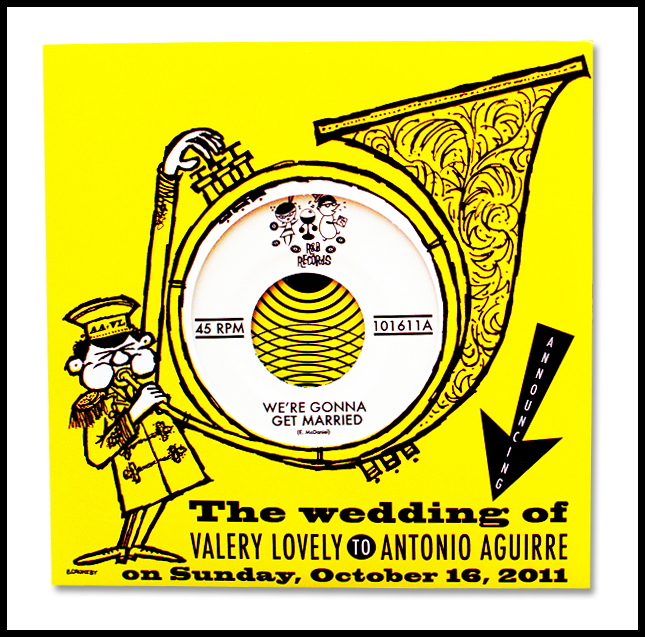 That's right, folks—it's been well over a year in the making, but it's finally happening: we'll be tying the knot this coming Autumn! While we typically stray from posting too much personal stuff on the blog, we couldn't resist sharing Valery's lovely invitation announcing our impending nuptials. We'd also like to take a moment to thank Harry, Hone and Andreas for all of their help. These gentlemen were instrumental in getting the record pressed, creating our label logo and wandering the streets of  Göteborg in search of an obscure company sleeve. And let us not forget Bo, whose song set this ball rolling within days of our engagement. RIP.

In a feat of peculiar, cosmic synchronism, our wedding date will also coincide with the second anniversary of this blog! This curious fact reminds us that we really should applaud all of you fine folks for joining in on the fun thus far. Subsequently, we would like to extend our sincerest gratitude to you all ...even the bedwetter who thinks we abuse our fish. Thank you all for your continued support and friendship!
at 7:32 PM 9 comments
Newer Posts Older Posts Home
Subscribe to: Posts (Atom)