Our apologies, folks. Real world commitments—also known as going back to (grad) school and working against insane deadlines—have conspired to keep our blog productivity low. Fear not, gentle readers, as we've still found time for all manner of insane procurements—recent acquisitions that're guaranteed to leave you duly stewed. 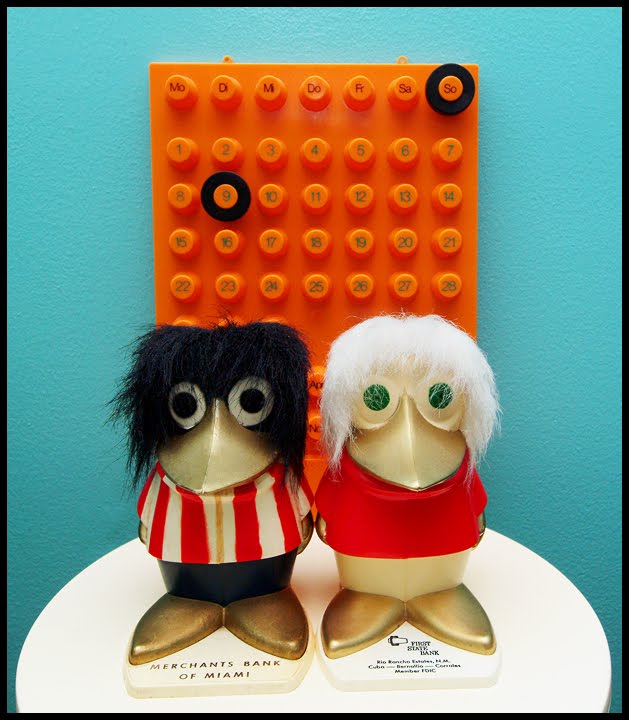 So, without further ado, let's ease back into these updates with our avian friend, Tivvy. Based on a Fauni gonk from Finland, Tivvy was a 60s mascot that bumbled his way into books, a television show and at least one 45. He was also adopted as an unlikely model for promotional toy banks in the UK (USB) and the US—our two banks hail from the unexpected locales of Miami and Albuquerque. It should also be noted that the albino has a bow in its hair, so she's technically Mrs. Tivvy ...we think. How did a Finnish gonk get all the way over here? Anyone? 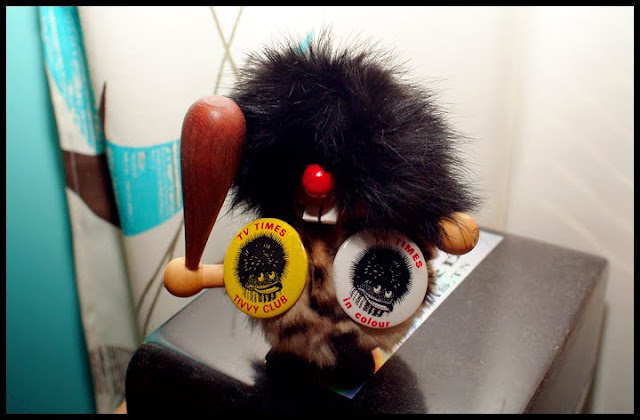 Here we find a caveman sporting two original badges promoting Tivvy's club and his television program, TV TIMES. He'd apparently swapped his moptop for an afro, by this point.

With so little info available, our Tivvy research remains woefully incomplete, and GG&S is in dire need of an original Fauni Tivvy (stuffed) troll. Any of our Finnish readers are encouraged to send us one, thereby ensuring their eternal place in our hearts. Chop chop!
at 2:33 PM

I found one of those birds, from a bank in Ohio, at a local antique mall last year. I went back the next day to buy it, and it was gone.

These were promotional items? How cool! If I ever come across one, its all yours! Welcome back to blog land!

Kind of unrelated to this, but a blog I regularly read just posted pictures of some bullet planters that looked mighty familiar...

(They've provided due credit of course.)

Thanks for the kind words!

Petro, you need to start buying stuff when you find it!

Thanks for the link, Sarah. Glad we got credit this time.

Yeah, I usually do, trust me...but I'd already spent all my money that day. I think my friend Mark, who was with me when I found it, went back and bought it out from under me. He's kind of a dick like that. I'm sure I've done the same to him too.

I've seen those Fauni Gonks from Danish and Swedish banks, too.

Let us know if you ever come across the stuffed troll version!

I had heard that Tivvy was employed as the TV Times mascot because of his name - but that does not now seem correct: he was actually renamed.

The TV Times ads were animated by Bill Hopper of Moreno Cartoons. When TV Times wanted to feature Tivvy in a weekly strip producer George Moreno would scribble up an idea and give it to Bill on a Friday, for him to ink up over the weekend.

George made a series pilot (stop motion) featuring the Fauni Trolls, but was unable to sell it.

i read somewhere that tivvy's girlfriend was named tovvy...dont know if thats true or not?

also, don't know if this interests you: http://www.etsy.com/listing/55611393/rare-antique-plastic-wallhanging-bank?ref=sr_list_2&ga_search_query=crow+bank&ga_search_type=vintage&ga_page=&order=&includes[0]=tags&includes[1]=title&filter[0]=vintage

We just found a female Tivvy today for a buck. You guys have any idea how much they're worth?

Not too much. They tend to sell for under $10 most of the time. There are a few weird variants that tend to be less common and go for more.